Gold as a Safe Haven in a Bear Stock Market: It’s Déjà Vu All Over Again 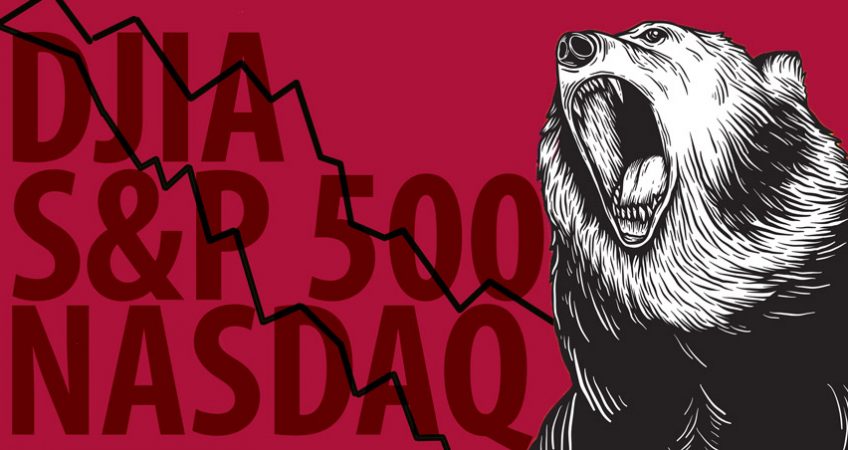 Déjà Vu (noun):
1) a feeling that one has seen or heard something before.
2) something overly or unpleasantly familiar.

And the December 4 selloff of almost 800 points.  That’s a single day loss of more than 3 percent, the fourth largest single day point loss in stock market history. Two trading days later it was down another 558 points.

It is simply oxymoronic to describe a market with this volatility as a stable and welcoming investment environment for the American peoples’ savings and future prosperity.

A Bloomberg’s headline said, “It’s the Worst Time to Make Money in Markets Since 1972.”  It summed up its story with these words: “There’s nowhere to run.”

Of course, there is somewhere.  But we don’t expect the mainstream news media and the financial press, mesmerized as they are by the shiny ties and the titles of Washington bureaucrats and Federal Reserve officials, to have anything but antipathy for gold, its thousands of years of being the world’s most reliable standard of value notwithstanding.

Their attitude is easy enough to explain.  Politicized money feeds the dreams of the political ambitious, while gold leaves power-hungry operators powerless. That is because gold cannot be manipulated like interest rates and monetary conditions, to the benefit of their influential contributors, Wall Street “banksters”, and other cronies of the State.

So, they will not tell you to turn to gold when the economy shudders and shakes and the stock market has become a thrill ride of unexpected plunges.

To do so, we have selected three dramatic stock market collapses in the modern era that resemble today in many ways.  You will learn that gold soared while the stock market was a chamber of horrific losses.

The 1970’s: The Stagflation Decade

One young man who had started to learn about markets before Uncle Sam sent him to Vietnam, came home and wondered if every stock in America had had a stock split.  That’s because during 1973 and 1974, while he was otherwise occupied, the stock market had fallen in half.

What happened?  First, Nixon had repudiated the dollar’s convertibility to gold.  Since OPEC producers discovered that they were to be paid in dollars that could be printed endlessly without restraint, oil prices began to rise.  Domestically, businesses were staggering under Nixon’s wage and price micromanagement.  And the Federal Reserve changed interest rates like a madman.  It engineered more than 20 interest changes some years.  The official inflation rate hit 12.2 percent in 1974.

Of course, the stock market fell in half.  Of course, gold was the place to go.

Incidentally, while the stock market fell in half in 1973 and 74, the pain wasn’t over then.  Although it struggled to recover, it fell again.  In the year and a half between September 1976 and March 1978, the S&P500 fell 19.4 percent.  During the same brief period gold rose 54 percent.

The 1970s became known as the Stagflation Decade:  a combination of stagnate economic growth and inflation.  You could have seen it coming as early as 1971 in the overreaching intervention of Nixon’s economic policies, and in the collapsing of the stock market, evident in 1973.

Incidentally, like today, the presidency was in turmoil.  President Nixon was forced to resign in August 1974.

The ownership of monetary gold only become legal for Americans in 1974.  With the excitement of that development, which resulted in an initial frenzy much like a hot stock initial public offering, gold settled down to just over $100 an ounce in 1976.  But as a safe haven alternative to the battered stock market and the economic turmoil all about, gold started running up from there.  And it just kept running, up to $850 by January 1980.

Suppose you had decided to just “ride it out,” and you stayed in the market during the whole brutal period?  From its 1974 low, it took eight years for stocks to return to the high they had hit in 1972.  But because the intervening period had been characterized by high inflation, in real terms, or in terms of purchasing power, it would have taken more than 20 years to restore your wealth.

Early 2000’s and the DotCom Bubble

In the late 90s, you couldn’t walk into a Starbucks without hearing people talk about the money they were making in stocks with names better off forgotten… Pets.com…  InfoSpace…   eToys.com…. WorldCom…   Drugstore.com…     DrKoop.com….  Some of the companies were not much more than business plans scrawled on a cocktail napkin.  Others with no revenue somehow became hot IPOs.  Internet companies were being valued for their “eyeballs,” or how many people would supposedly visit their web pages.

Those of us that objected to companies with no profits being valued higher than companies that actually made a lot of money selling real products and services, were told that it didn’t matter because this time “it was different.”

But it’s never different.  The fundamental laws of economics still applied then.  Just as they apply today.

The dot com rage was just one of Federal Reserve Chairman Alan Greenspan’s bubbles.  When it popped it cost American investors $5 trillion.

It was a bloodbath.

The attacks of 9/11/2001 gave fuel to the gold market; the gold price immediately jumped, as it does in a crisis.  But there was more to it.  First, Greenspan gunned the money supply.  Then, on March 16, 2002, Vice President Cheney paid a visit to Saudi Arabia.  His message was clear.  The United States was going use 9/11 to roll-out a larger war in the Mideast.  The empire was going to go for broke.  And the financiers of the world now knew it.

But it came to pass that deficits do matter.  Ignited by the stock market crash and fueled by Greenspan’s money printing and wild deficit spending, a new gold bull market roared ahead.

What about those that decided to ride out the Nasdaq crash?  For them, it was a long fifteen years waiting for the market to return to its old highs.

What if instead they had moved prudently out of stocks in 1999 or 2000 before the market plummeted, but when it was clear that, like today, stocks were in an unsustainable bubble?  And what if they had then moved their gains into gold before the prices took off?

And if you didn’t do it then, what if you had another chance to do it now?

When he left, the country had just entered the worst economic downturn since the storied Great Depression.  Greenspan had been at it again.  To compensate for the popping of the prior bubble, the dot com bubble, the so-called “Maestro” cut interest rates 13 consecutive times between the beginning of 2001 and the middle of 2003, driving the Fed funds rate to 1 percent, and leaving it there, below the inflation rate.

He had created the housing bubble!

With trillions of dollars of unsupportable real estate loans being made with a that cost free money, it was what someone described as a bubble in search of a pin!

Now, here is the part that today’s investors need to know.  The Fed began raising interest rates.  Sound familiar?  The pin had been found!

The Great Recession began knocking at the door.  Mortgage delinquencies climbed and Wall Street powerhouses – like Bear Stearns and Lehman Bros. with their subprime mortgage hedge funds – began to crumble.  The Panic of 2008 ensued.

We have chosen these three stock market crashes to illustrate where we are today and the future that is being signaled to us by today’s extreme market volatility.

Each of these crashes was preceded by a monetary policy binge: the reckless delinking of the dollar from gold in the 1970s, the joyride of the dot com bubble, and mortgage the bubble.

Just as the Fed responded to the popping of the dot com bubble with the creation of another bubble that ended badly, today’s stock market has been frothed to its present high levels by another money creation mania, Quantitative Easing, a madcap policy to offset the damage from the popping the mortgage bubble.

You should note that the carnage will be worse this time.  Much worse.  That is because the Quantitative Easing bubble is so much bigger that anything before.  The Fed today owns $1.7 trillion of toxic mortgage securities it bought to take off the books of its crony banksters.  It owns another $2.3 trillion of federal government debt, purchased to make Washington’s deficit spending easier.  Each of these trillions of purchases was paid for by creating “money” out of nothing more that digital bookkeeping entries.

This money creation represents the biggest bubble in the history of the world.  At the same unfortunate time, the United States is the biggest debtor in the world.

Just as it triggered the collapse of the housing bubble and brought the stock market to its knees with its higher interest rate regime, today the Fed is raising rates again.  And once again the stock market is gyrating wildly.  It is virtually shouting that there is no safe space to be found in stocks.

As of writing, USA Today has just published a piece headlined, “Stocks are plunging.  Here’s what you can do.”  Speaking as the establishment voice that it is, the newspaper says nothing about gold’s exemplary profit performance in these episodes.  But it does advise you to “control your emotions,” as though the fault is somehow with you instead of with the boom and bust makers in Washington.  And it tells you to think long-term.

We advise you to think long-term as well.  Over the long-term of this survey, the market has crashed, crashed, and crashed again.  Each time the monetary authorities create a new bubble to cushion the pain of the prior one.  Each new bubble pops in succession.  This, the biggest-of-all bubbles, will end like the rest.

As with each of the prior crashes, there is only the safe haven of gold.

“I know of no way of judging of the future but by the past.” – Patrick Henry